"The Institute at Cal Poly is an ideal staging ground for technologies that have the chance to positively affect both policy and citizen life.”

The mission of the Institute is to develop and promote practical solutions to real-world problems by informing and driving public policy through advanced technology.  Interdisciplinary teams of students, faculty, industry leaders and policy experts adept at removing barriers apply technology to craft practical yet transformative solutions ripe for implementation.

Sam Blakeslee founded the Institute for Advanced Technology and Public Policy at Cal Poly in 2012. With a portfolio of experience as a scientist, business owner and legislator, his goal is to bring these diverse worlds together with cross-disciplinary thinkers at Cal Poly to solve some of the most complex public policy challenges facing society today. 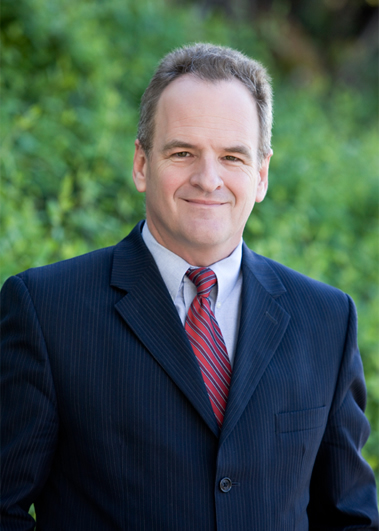 Dr. Blakeslee graduated from San Luis Obispo High School and attended Cuesta College. He first worked in construction, then attended U.C. Berkeley where he earned bachelor's and master's degrees in geophysics. He was awarded a Ph.D. from U.C. Santa Barbara for his work in seismic scattering, micro-earthquake studies and fault-zone attenuation. As a strategic planner and senior research scientist with Exxon, he received a patent for his innovative work in geologic imaging.

Blakeslee was elected to the California State Assembly in 2005 and later to the State Senate. Elected by his fellow legislators, Blakeslee served a term as Assembly Minority Leader. In this role, he was a member of the "Big 5" with responsibility for negotiating the state budget and major policy initiatives. He also served and held leadership positions on a variety of legislative committees focusing on agriculture, energy, banking, environmental quality, education and other fields. He successfully authored dozens of bills to evolve and reform policy related to energy, the environment, health care, job creation, lobbying reform, public and worker safety, veterans' affairs and other areas of concern. 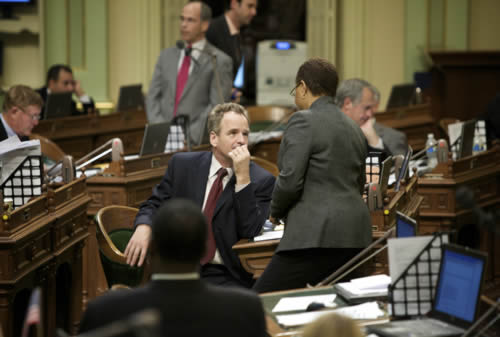 While serving in Sacramento, Blakeslee founded and chaired the Task Force on Energy, the Environment and the Economy known as "E3." The group developed strategies to bridge the divide between the environment and the economy by applying emerging technology. This work fueled Blakeslee's conviction that advanced technology can be a critical tool in evolving public policy to better meet the needs of the modern world.

During the course of his career, Blakeslee has been active in civic and community life. He has been a Board member with the San Luis Obispo Chamber of Commerce, the Central Coast Natural History Association, the Wildlife Conservation Board and Saint Joseph High School in Santa Maria. He also served two terms as a Trustee of Cuesta College. In 1999, Blakeslee authored the DREAM Initiative, a San Luis Obispo County ballot initiative that created a long-term vision for the future of PG&E's 12-mile scenic coastline known as the Diablo Canyon Lands.

Blakeslee has been recognized for his bipartisan leadership skills by many different organizations over the years. He earned Legislator of the Year awards from the California Police Chiefs and the Faculty Association of California Community Colleges. He has been singled out for his dedication to the environment with a Climate Hero Award from the consumer group CALPIRG, a Public Service Award from the American Institute of Professional Geologists, the Rhodes Leadership Award from the League of Women Voters, and recognition for support by the Partners for the Conservation of the Los Osos Coastal Dunes. He has also earned awards for advocacy from organizations representing seniors, the disabled, physicians and dentists and cattle ranchers.

In 2009 and 2012, the Sacramento Bee recognized Blakeslee as one of "Sacramento's Most Bipartisan Legislators." This distinction reflects Blakeslee's drive to balance the needs and interests of diverse constituents and craft solutions to thorny issues that help solve problems for all. Now serving as the Founding Director of Cal Poly's Institute for Advanced Technology and Public Policy, Blakeslee is applying his skills in bringing experts together to focus on developing practical strategies for real-world challenges.

Prior to joining the Institute, Lisa worked 12 years as a Senior Grants Analyst for the Cal Poly Sponsored Programs where she was responsible for administration, budgets and compliance of grant funded projects. She worked closely with principal investigators and collaborating faculty, as well as government and private sponsors, to advance Cal Poly’s commitment to high quality research. She previously spent five years administering gifts for the University as the Cal Poly Campus Programs Analyst. She holds her degree in Applied Development Psychology from Cal Poly, San Luis Obispo.